Another great blockchain game with a play-to-earn aspect from the Enjin catalog is Lost Relics. Good chance you’re one of the 90,000 people already waiting to get into this fun explorative picturesque battle packed RPG, and I can say I’m one of the 26K having played it- it’s worth the wait! In the meantime, let’s find out more from Cliff Cawley who has created and led its development.

Hey Cliff we’ve spoken before in a previous Meltelbrot, but for those who don’t know your game yet, what’s Lost Relics about?

Originally built as more of an arcade RPG inspired by games like diablo, Lost Relics has grown organically into something more like Runescape. With truly rare items to find, collect and sell, and the world being built around you, you’ll find yourself lost in the lore and community.

I’ve always played video games as a kid and into adulthood. Around 18 I entered the video games industry and worked there for about 12 years before moving into commercial software. At some point I heard about blockchain but dismissed it, not really investigating it and assuming it was a scam. Years later, after actually reading the bitcoin whitepaper, I understood the potential and discovered Enjin was working on something in the gaming space.

Why did you settle with Enjin as your nft gaming platform?

When I looked around at all my options, they were the most professional and developed solution available at the time. I didn’t want to have to maintain my own contracts and blockchain code, I wanted to work on the game, so they were a natural fit.

Play to earn is a big thing with gaming these days, do you agree with it?

I see it as a bit of a double-edged blade. Blockchain gaming quickly skipped over user ownership (buying into a game and then potentially being able to resell later once you moved on) and jumped straight to being about playing to gain an income. While that’s certainly an option, this space is still in a very infantile stage and shouldn’t be thought of to replace a day job, like some people seem to be trying to do.

There are definitely some locations in the world where play to earn games have provided people with a higher income than jobs that are available to them, but I worry that treating the act of playing a game, as a job, focusing purely on the resellability of items, will remove the fun and entertainment that gaming traditionally has brought.

Yeah, we musn’t forget it’s a game and about the fun, whether you collect play or both. I must say your game has a huge selection. What’s the drive to have created so many NFT for your loyal community?

Originally I envisioned having all items in the game as blockchain items. Allowing players to have their own free-market around the items and resources they could find. Over time it became clear that this wasn’t sustainable with Ethereum’s gas prices and in fact, it caused some major economic struggles for systems in the game that relied on those blockchain items.

I have plans to add more in the future as the player base expands, but I’m also ensuring I’m not flooding the market with too many items, to ensure items still maintain their value and rarity.

Like true relics, lost but never forgotten 🙂 Being in the space for years now, what’s the pitfalls and what’s the loot? Pun intended.

When money and people are involved, certain attributes seem to stand out. A lot of players are very thankful, encouraging and understanding, but there’s definitely others, with a focus on the money side, who get very aggressive and demanding. It’s impossible to please everyone no matter what you do, so just accepting that and doing the best you can is all you can do.

This space is evolving every day and I think we’ve still got a long way to go, with many challenges ahead, however it’s very rewarding when you can watch people streaming and enjoying the work you’ve done and experiences you’ve provided.

I recently saw in a gecko tweet that LR has 70k gamers on the wait list? That’s a long list, how much longer do they need to wait to play?

Yeah that number is sitting at 90k now. It really just depends on the limited items and a few other things. I don’t want to flood the economy with players all looking to simply grab free items. All my items are limited in supply, and there’s not enough available to give all those players an item each anyway.

I’m still in pre-alpha and already have 90k active accounts. That’s unheard of for a game in early access and I want to ensure I build out the game some more first.

Shows the power of a ground-up blockchain gaming community. The NFT space has grown with it I feel. Do you have a favorite NFT?

I honestly haven’t looked at much outside Lost Relics as I’ve been too focused on it. I see a lot of art-related NFTs making headlines due to the amount of ETH they sold for, but I don’t think that’s sustainable, because they have no utility. However if they’re valuable to the person who bought them for that price, then that’s all that matters.

As for Lost Relics, I’ll just say all of them, because, like any proud parent, you can’t choose favorites (even if you truly do have one). Also, my opinion will affect the markets, so I choose not to talk about it, unlike Elon Musk 😀

Could go up in smoke like Joe Rogan you reckon;) Which of your NFT is fan’s favorite?

That’s a great question and you’d have to do a poll for that as I’m honestly not sure!

(I didn’t get a poll done but from asking around it seems Arkor’s Ring, Harvester of Sorrow, Godslayer, Wrath of the Swarm, and Pumpkin are few favs. Maybe others can let us know in comments)

Another cool part of Lost Relics gameplay is the companion pets that smash the surroundings looking for loot. You’ve linked other games to these and now there’s also talk of companion pets being able to combat soon, what’s that about?

People are always asking if pets can do more than just find loot in boxes, so I’ll be introducing something unique for the pets in the future to allow them to be more helpful.

What else is coming up?

I’m about to release the next update with more skills, play to earn abilities, rewards and game modes. The game is always moving forward so be sure to check it out every now and then if you haven’t for a while!

Stay safe, be kind and positive to each other and most of all, enjoy the game!

True that! Thanks for the insights Cliff and should others want to follow the next evolution of Lost Relics, click your relevant social. ENJoy! 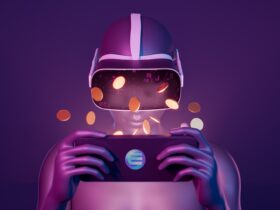 BLA 1 – Boxmining The Past