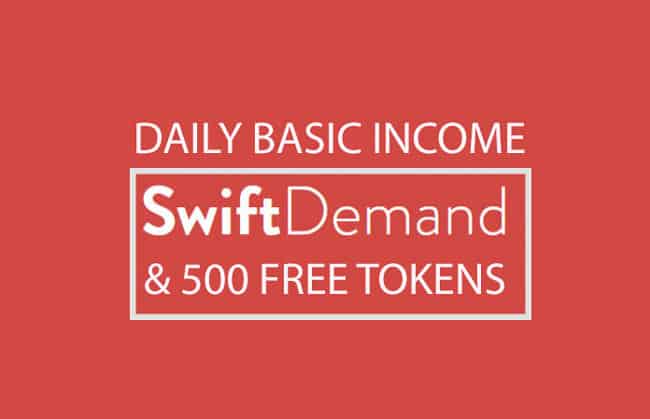 For the first time in history, blockchain provides you with a basic daily income for life. Think about it, multiple services paying basic income in cryptocurrency every day. This is huge right?

Basic Income in Cryptocurrency is making huge steps against poverty by transforming our economy into a more democratic way through decentralization. Governments are playing the role of legal thieves by collecting insane taxes (see Greece), every single one of them has failed to provide a basic income for their residents, proven unreliable over the years and driving economy inflation to an all-time high.

SwiftDemand is an experimental platform I am using for some months now without any issue. The concept is straightforward, basic income, or – passive income as I like to call it.

Each user received 100 Tokens per day or up to 3100 Tokens per Month. The amount is fixed and it won’t change. In the long run, SwiftDemand is creating a democratized community of wealth by bringing down the gap between wages.

Swift Tokens has no value at the moment outside the SwiftDemand Ecosystem.

Swift Demand is meant to be used as a currency that will bring us the first working basic income project. Below I am highlighting some of the main SwiftDemand Ecosystem Features.

Every platform user has to complete basic KYC requirements including verification of mobile number. Government ID is not mandatory.

As I stated earlier, each user gets 100 Tokens per day, you only have to log in once a week and collect the week’s payment. If you don’t log in within a week, you are losing money, the amount of total Tokens received at once is 700. In other words, if you haven’t claimed your tokens for 2 weeks, you will still receive 700.

Supply is endless, I don’t believe that this is good, since crypto supply is a big deal for price increase but SwiftDemand plays a different card here. There are plans to deny new users registration once the platform reaches 5 Million Users and the only way to receive new tokens will be using their system. (No reward for referrals as of that day)

The concept of basic income is getting more and more popular as the time goes by. Eventually millions of people will support this type of projects to change their daily life and bring value to society. SwiftDemands, even as an experimental project seems legit and progress is being made every day since I first used the platform. Maybe the experiment will fail, maybe it will get so popular that those 100 Tokens a day will worth much more than you can imagine. Time will tell, I’m optimistic about this one.

Register using our link and get 500 Tokens for Free

Register without our link and get nothing 🙂

ABOUT US
egamers.io represents the new era of gaming and innovative dapps. We write about Blockchain Games that actually reward you to play and for decentralized applications that change the world day by day, code by code, token by token. Brave enabled website.
Contact us: [email protected]
FOLLOW US
© 2020 EGAMERS.IO