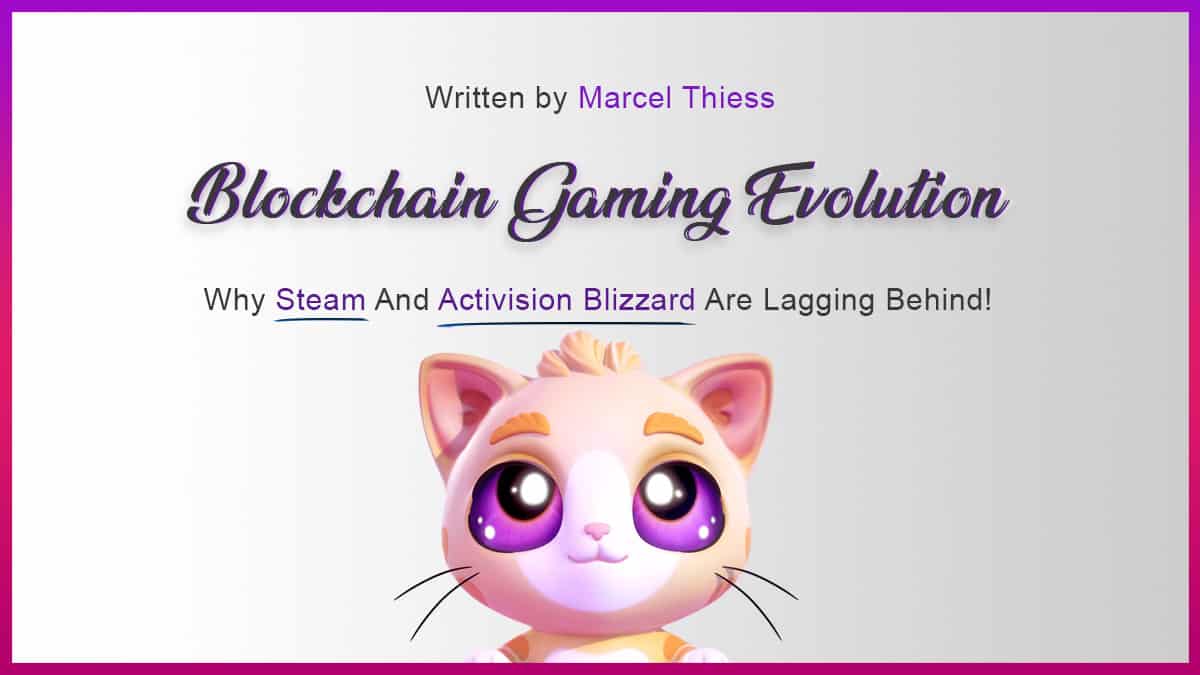 Blockchain is coming to Gaming, and it’s, in some way, revolutionizing the way we trade in-game items.

Moreover, the potential of Blockchain is being recognized across the gaming sector. Ubisoft, the French gaming giant, has announced recently that blockchain technology will be leveraged in several games currently in development.

Nevertheless, If you are in the Blockchain Gaming space and follow the news, two prominent names are missing; Activision Blizzard and Valve (Steam). Could this disregard indicate the beginning of the end of these publishers?

To find answers, let’s begin with the gaming market in general to gain some perspective.

The global games market will generate over $152.1 billion in 2019, according to the research firm Newzoo. With more than 2.5 billion gamers worldwide, an ever-growing mobile games market, and a significant impact on popular culture, Gaming, in general, is indeed a success story.

The global Blockchain Gaming Market, on the other hand, is relatively small, and substantial numbers on revenues are quite rare.

The industry of traditional in-game item exchanging is currently dominated by the prominent publishers with games like CS: GO and World of Warcraft. Nevertheless, NFT-based in-game items and collectibles have seen a measurable spike in recent years with innovative games like Decentraland, ready to grow even faster.

Non-Fungible Assets can be anything from virtual cards and skins to digital likenesses of celebrities that are verifiably scarce. Smart contract standards such as the ERC-721 non-fungible token standard and the newer ERC-1155 ensure the authenticity of individual items.

NFT (non-fungible token) marketplaces like OpenSea have handled over 25,000 ETH (about $4.6 million) since 2018. While these numbers don’t sound impressive compared to the $50 billion (per year) in-game item market – we have to keep in mind that the hype around NFTs started only a few years ago, back in 2017.

The blockchain gaming industry is dominated by three sub-sectors:

Gambling is the biggest sub-sector and has been a growth factor for the Blockchain Gaming ecosystem ever since Bitcoin gained popularity as a currency for online poker.

The most popular blockchain games are collectibles like CryptoKitties, which went not only viral in 2017 with its adorable digital kitties but also enabled a whole bunch of other popular projects like 0xUniverse to gain traction.

BeachHead is even taking it a step further by developing a blockchain-based game for VR devices. Players can earn tokens for protecting a city against the marauders, using a variety of weapons, which can be spent on entertainment and trading.

A typical challenge facing Gaming is the inability to prove ownership of virtual items, which in some cases, can lead to fraud. Smart contracts, or more specifically, NFTs, allow users to trade their items securely while creating an environment of trust.

Decentralized asset exchanges provide the necessary infrastructure to trade these items. Some famous examples are Wax, OpenSea, and Rare Bits.

Launching a game on Blockchain has several advantages:

As well as several disadvantages (for the publisher):

Steam has built an enormous ecosystem around its platform over the years.
By 2019, the service had over a billion registered accounts, with 90 million monthly active users.

However, the platform has not been without controversy, mainly due to its monetization model of taking 30% of the earnings. Recently, Valve, the company behind Steam, has dropped some news that they would adjust the revenue share system from 70/30 split to a tiered system, with more revenue going to the developers of games that earned over a certain threshold.

The new model is taking Steam to the opposite direction of where Blockchain Gaming Platforms are headed. Valve now takes a cut of 25% of games that earn over $10 million in sales. On the other hand, projects that make over $50 million loose only 20% of their earnings, rewarding larger studios and publishers while smaller game developers have to take the highest cut.

Activision Blizzard is a true gaming giant that develops many popular game franchises, including Call of Duty and World of Warcraft. Thanks to its acquisition of King, mobile games like Candy Crush have joined their portfolio as well.

While Activision Blizzard’s stand on Blockchain is unclear, veterans of that company have recently closed a $16 million Series A round with their LA-based startup Mythical Games.

Activision Blizzard, though, does not seem to be drawn to this unique technology, so the technology and its backers go elsewhere. Sorrowfully, this is what happens to corporations that do not invest in innovation but rather advance in conserving the status quo.

So, why should these developments concern the execs of Activision Blizzard and Valve? While the future is already beginning, these large companies are headed in the opposite direction: more centralization, less creativity, more of the same old formula. History, however, tells us that such large entities can quickly disappear.

Remember AOL? These guys were on the wrong side of technology history. Dialup was replaced by much newer technology, broadband internet access. Cable companies in the U.S dominated that market. When AOL realized that broadband technology was the next big thing, they were already gone (100 billion dollars yearly loss).

It’s risky to underrate change around you, even if it’s almost unnoticeable. VCs from across the globe, and specifically China have entered the game and invest heavily in this emerging space.

Blockchain in Gaming is promising, but one major question remains, will Blockchain overcome its scalability issues and become a significant factor for growth? Publishers like Activision Blizzard and Valve seem to have answered that with no, for now.

The opportunities for developers, on the other hand, to properly monetize their games have grown. Blockchain-based gaming platforms provide them with new methods to gain independence from Steam and such.

A rapid shift in the gaming landscape is not likely short-term, but could potentially be a thriving factor someday.

In the end, Gamers will decide the ultimate fate of Blockchain in Gaming, Activision Blizzard, and centralized platforms like Steam.

Gamers were some of the first adopters of virtual-currencies as well as in-game item trading – and they will be the first ones using cryptocurrencies and smart contracts in Gaming, shall the trend persist.