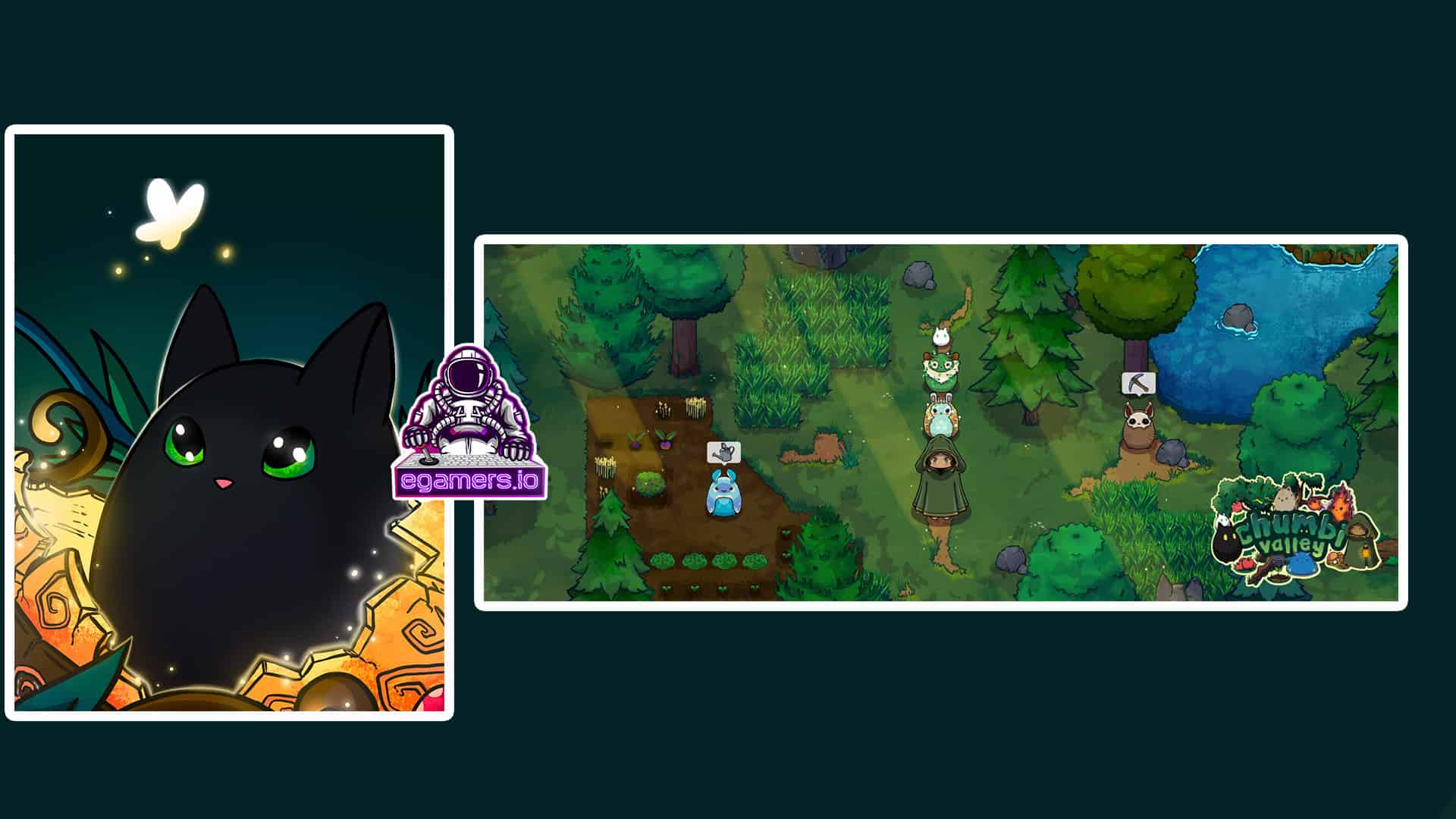 Chumbi Valley is an upcoming role-playing, Play-to-Earn (P2E) game. The game will be playable on PC, MAC, Android, and later in IOS. It is based on Polygon Network because of its transaction speed and low fees.

All in-game items and creatures are digital assets (NFTs), inspired by classics like Zelda, Stardew Valley, and Pokemon.

Players will spawn in a mythical forest and spend their time raising creatures called Chumbi. The players and Chumpi will work together to get cryptocurrency rewards with actions like farming, battling, exploring, and more.

What is a Chumbi?

Chumbies are creatures that live in a mysterious forest valley and use magical spells to protect and maintain it.

Every player starting the game will be paired with an Ancestor Chumbi to get started. This individual Chumbi is not an NFT and cannot be sold or traded.

Chumbi Can Level Up

Chumbi are creatures that can level up and increase the reward potential.

In order to level up your Chumbi, you have to battle against other trainers or fight a wild cursed Chumbi.

You can send your Chumbi to the Chumbi Sage to increase and learn new spells. This will allow it to gather valuable in-game crypto resources, even if you are offline.

Chumbi happiness is crucial because it unlocks higher staking reward APY when it is assigned to the Shrine of Giving. To increase its happiness level, you need to feed it its favorite food, which sometimes the materials might be rare.

Each Chumbi has different parts, and all are NFTs.

The crucial parts are Main Type and Coat Type. With ten coat variations in every fifteen main types, you can easily make unique and different Chumbi in addition to the other body parts.

You can breed any Chumbi together. By breeding compatible Chumbies, you will have the chance to create a higher-tier type.

There are four different tiers. The best is 4, and it only includes one Chumbi type called the Void.

Each Chumbi has two attack moves, two effect moves, and an ability.

The first attack move is based on Chumbi’s type, and the second on coat type. At the same time, the effect moves are based on the other body parts.

Whenever you win a battle, you’ll be awarded XP that you can use to level up your Chumbi. But when each time the level increases by 5, it will need to eat a Candied Apple to progress to the next level. Candied Apples can be crafted by combining Lucky Stars and apples.

Lucky Stars can be earned by defeating Cursed Chumbi, a creature that is peaceful but cursed from the dark forest.

Wake up in a relaxing forest and meet your first Chumbi. Work together and expand your team with more Chumpi. Unitedly gather resources to craft precious NFT items to inhabit and build a home.

You can activate an ancient portal and explore random terrains with your Chumbi team. In these random terrains, you can find rare NFT items and find the cursed Chumbi. Weather and season will give a good vibe and a reason to explore happily.

Rare forest seeds can be found for you to start a farm or other uses. Crops are also in-game digital assets and will need to be watered regularly and grow in blockchain time. Plus, crops are valuable materials to create Chumbi’s favorite food.

Sending your Chumbi to the Chumbi Sage will benefit you by learning how to automatically water crops, chop wood, catch fish, collect stones, and more passive abilities. That means your Chumbi will automatically collect valuable in-game tokenized resources, even when you are offline.

Scholarships are also a thing in Chumbi Valley. You can rent your precious Chumbi to other players and play with it. Of course, you will get a percentage whenever the other player wins with your Chumbi. Great news for business minds.

Chumbi Village will feature NFT based plots that players can buy as an NFT. Having a property means you can customize it, sell it, and get access to special events such as capturing wild Chumbi and fighting together in raids against giant cursed Chumbi.

There are a lot of ways to earn in Chumbi Valley. Some may focus on battles, some others on farming. You can choose any way you want.

There you can lock your items and Chumpi as well as your CHMB tokens reducing the circulating supply and receiving CHMB tokens and NFT items as rewards for doing so. Assigning Chumbi with maxed happiness level will become a highly prized NFT.

The online marketplace will provide excitement to the players and a reason to play regularly by profiting from selling every digital asset there.

There will also be a Wandering Trader that can be found around your forest home. Every day different items will be shown in his shop and some may be rare and limited in quantity NFTs.

Chumbi Token ($CHMB) will become deflationary and will reward players that keep it. With that, they will achieve price growth in this ways:

Lucky Stars (LSTS) is Chumbi’s Valley secondary token to empower the Play-to-Earn reward system. The token will have an infinite supply but will be required to be burned for four mechanics to make the token a prized commodity as it is required to create new Chumbi and to improve them.

The four mechanics are:

You can earn $LSTS by PvP or PvE with cursed Chambi.

Also, exploring, quests, farming, and all these features will award you with the token, while the Chumbi Valley team will ensure that an optimal balance is maintained between supply and demand.

The first 4,096 Chumbi NFTs generated will become the rarest of all. They will be known as Seed Chumbi with exclusive body parts, low ID numbers, and more. The owners of Seed Chumbi will receive extra airdrops and access to VIP events such as pre-launch breeding, beta gameplay, and much more.

Chumbi Valley will not be holding an IDO. Instead, 4,800,000 $CHMB tokens will be airdropped to our community as a gift. After the airdrop, CHMB tokens can be traded from Decentralized Exchanges. The date is yet unknown.

Chumbi Village Presale (Not Yet Known)

Land plots in Chumbi Village will be sold to early-bird community members. These NFT properties will be located in prime areas of Chumbi Village and will also include exclusive land items and other benefits.