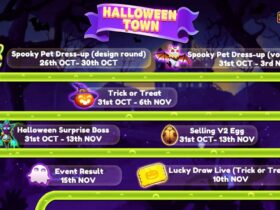 Even though the overall crypto market was red in May, crypto games and web3 projects were performing well.

To depict how the market dumped and web3 projects stood strong, we’ll take a look at the report the DAppRadar published a while ago.

The report covered NFT projects and their activities, DeFi projects, and blockchain games. Back when 2022 started, there were some concerning numbers that indicated how NFT sales were down from their all-time high. In April, the metaverse and NFTs saw some relief as public interest started growing.

Now, as the market dumps, the metaverse, crypto games, and NFT projects are holding strong.

The DAppRadar reported that the industry had $117 million in Total Locked Value (TLV). In April, the TLV was more than 45% of what it was in May. That made May the most repressed month for DeFi.

While all the projects were affected, Tron was the only network that managed to keep a positive TLV (it had an increase of 47% TLV). As the DeFi sector achieved an 11% YoY growth in TLV, the report suggested that the DeFi sector is not only staying but also going to perform beyond our expectations. Meanwhile, Uniswap reaches $1 trillion in transaction volume.

If we measure the volume in USD, the report stated that the NFT transaction volume dropped to 20% in May. (6% down if we calculate it in native tokens)

It is a huge indicator that NFTs survived the May crash while alts were bleeding badly. Solana-based NFT projects grew 13% in April, generating $355 million.

It is worth noting that Opensea is not dominating the NFT space as it used to. As other marketplaces such as Magic Eden and Atomic Hub are generating decent volume, Opensea’s dominance is in danger. Coinbase NFT Marketplace, on the other hand, did not perform well. It generated only $2.5M in sales since it was launched at the end of April.

“The exposure that the blockchain industry receives from NFTs, puts today’s crypto market in an entirely different position from the conditions seen in the 2018 crypto winter. In those days the levels of engagement and enthusiasm around the industry were alarmingly low. While the mainstream media keeps calling for the NFT bubble to burst, the market conditions of the NFT space disagree”, the report reads.

When both DeFi and NFTs were down, crypto games were affected the least. Since April, the number of transactions was down to only 5% – which is a relief as the overall market is dumping. A16Z has recently committed $4.5 billion for metaverse and blockchain games.

The Mountains of Boreas 1 – VulcanVerse Lore