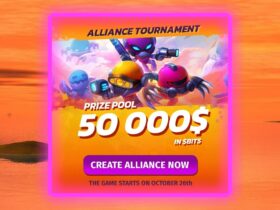 9Lives Arena released more information for the upcoming cross-platform companion Ooogie, and we are excited to share that information with you.

The blockchain-based AI companions are one of a kind as nothing similar ever existed before. Ooogies exist on the blockchain as ERC-1155 Token backed with ENJ coins.

9LivesArena is coming to Kickstarter on September 12th, 2018.

Ooogies are cross-platform companions that work 24/7 for 9Lives Arena players — even while you are offline or away from the game! In a sense, an Ooogy is like a Tamagotchi on steroids.

Ooogies, as cross-platform pets are available anywhere from your mobile phone, your Ooogy can gather resources, unlock skills and abilities, and craft items for you. Ooogies can level up and become more and more powerful.

It’s up to you if you decide to keep your pet or sell it!

Ooogies are an ancient race from long before the times of Atlantis. While we know little about their origins, we have discovered some interesting information. Ooogies come in many different colors and a wide range of appearances. In addition to common genetic traits, there are nine royal bloodlines of Ooogies, each of which adds a so-called royal trait to their gene pool.

There will be three different types of Ooogies available during the Kickster Campaign.

Like a classic Kinder Surprise egg, you never know which Ooogy you’ll get.

With more than 200 Million genetic combinations, you can be sure that your Ooogy will be unique. Random Ooogies will be a mix of royal genes and common ones. They will vary in appearance.

Themed Ooogies are rare, meaning that only a certain amount will be ever released. They wear accessories and tattoos that you cant replace later.

Those Ooogies are the special ones, with a pure, royal bloodline, King Ooogies are extremely rare and unique, and only twelve are ever going to exist. They will share the same king necklace and tattoo, but their outfit will be different. King Ooogies come at the max level. Thus they are going to have great stats.