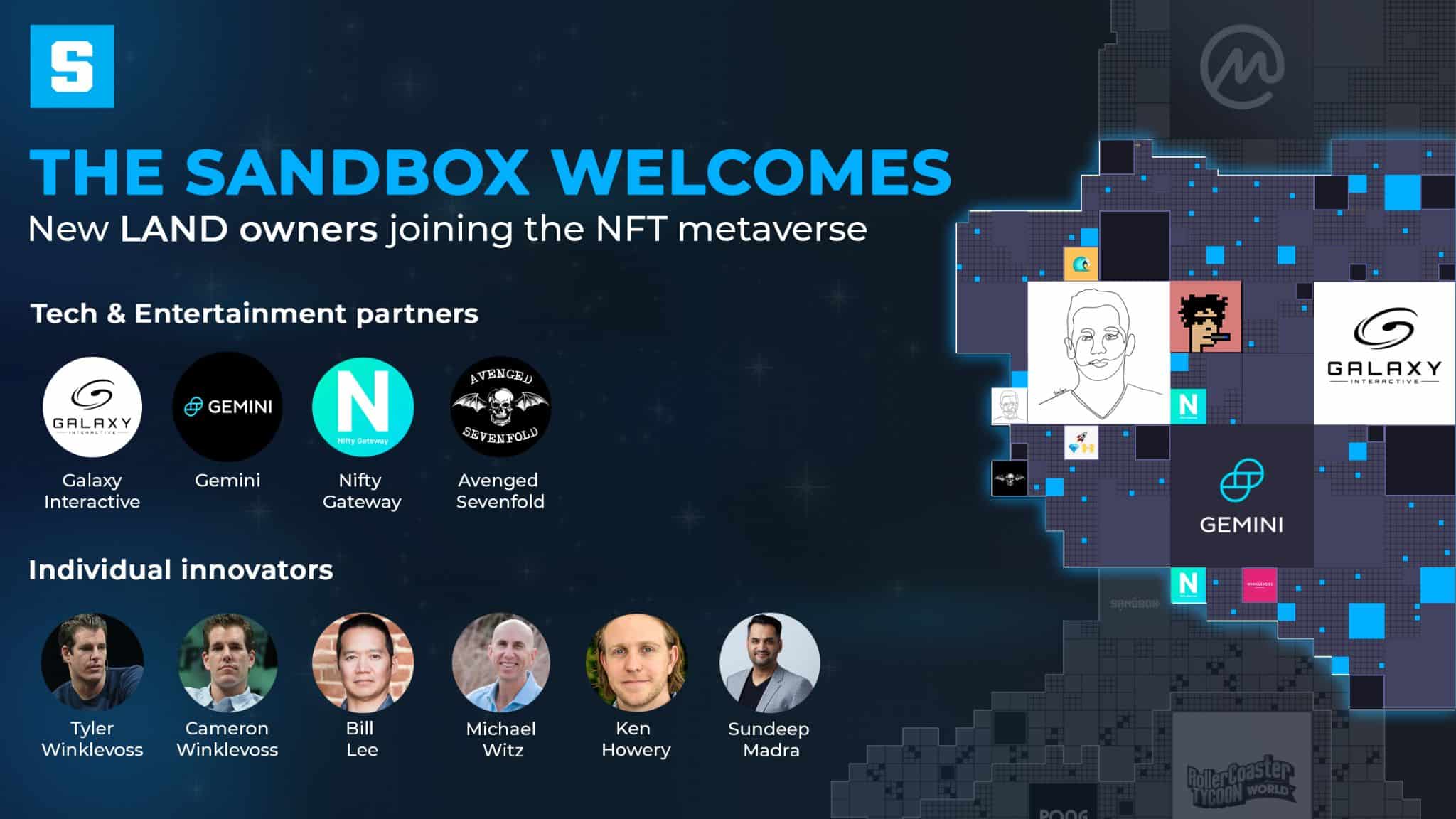 HONG KONG – April 8th, 2021 – The Sandbox, a subsidiary of Animoca Brands and the leading decentralized social metaverse platform, announced today that it has added multiple partners from the NFT, investment and music industries to its growing list of partners. As with previous partners, the new entrants have joined in The Sandbox’s virtual real estate by acquiring LAND NFTs in the open metaverse and committed to building experiences across the metaverse. To celebrate the new partners, The Sandbox will launch a new LAND sale on April 14 that allows players to purchase choice spots near partner LANDS.

“As a vibrant, growing NFT-based gaming metaverse, The Sandbox is attracting strong and diverse new partners each day, from gaming studios to IP brands to artists to celebrities to visionary entrepreneurs to technology companies,” said Sebastien BORGET, COO & Co-Founder of The Sandbox. “We’re shaping our virtual world to be an experience rich place where partners can plant a flag with virtual destination experiences on their LANDS in a powerful new entertainment community where creators, players and brands can build and grow alongside each other.”

The involvement of the partners announced today follows the beta launch of The Sandbox’s NFT marketplace, which gives anyone the opportunity to earn SAND, The Sandbox’s utility token, by monetizing voxel-based NFT creations created with the dedicated software VoxEdit. Each NFT can be used inside the game platform in the future or used to build custom game experiences. LAND NFTs are the main gateway to publishing games in The Sandbox, as the platform prepares for opening its first public beta for players later this year. The Sandbox was recently featured by the Wall Street Journal and CNBC as a pioneer in the space.

The Sandbox is becoming a prime entertainment destination where brands, IPs, and celebrities can engage with their fans and offer virtual experiences including games, live performances, and social experiences. Brands will coexist through neighboring lands, able to function as digital concert arenas, theme parks, or malls that users of The Sandbox can visit and experience by themselves or with friends. Reflecting on this potential, partner VCs, investors, and celebrity brands share their thoughts below on what attracted them to The Sandbox:

“We have been tracking the progress of The Sandbox ecosystem from its earliest days, and have been impressed by the founding team’s consistent execution towards their mission of developing a community-owned sandbox of creativity and fun. We are delighted to do our part to develop the community through the land we’ve acquired, directly and through our portfolio companies, and cannot wait to witness how the broader ecosystem evolves,” said Richard Kim, GP at Galaxy Interactive.

“Gaming is a killer use case for the metaverse, and The Sandbox is the only metaverse tuned for high-quality games with a decentralized monetization ecosystem for developers, asset makers, and passionate gamers,” said Bill Lee, Co-Founder of Craft Ventures. “21x will be developing all of our parcels into THE premiere gaming destinations across any metaverse — stay tuned!“

“The Sandbox is revolutionizing gaming by empowering users to build, own, and monetize their gaming experiences in a virtual world that is decentralized,” said Tyler Winklevoss, Co-Founder of Gemini Exchange. “We plan to extend our existing platforms into The Sandbox and develop unique experiences on our properties that advance our mission of empowering the individual through crypto.”

“We have officially purchased LAND in The Sandbox and are excited to build out a virtual space for our friends to explore,” said heavy metal band, Avenged Sevenfold. “Digital ownership and the metaverse have become increasingly interesting to us and The Sandbox felt like the right fit to enter this new world.”

The Sandbox’s upcoming LAND sale event on April 14th, 2021 will offer additional premium LAND located near the partners announced today. Each purchasable LAND will include exclusive premium NFTs and have the possibility to host events, gaming experiences, or social hubs when the game is released later in 2021. The Sandbox has already sold 45% of its 166,464 LAND NFTs, releasing them in successive waves that usually sell out in seconds. Existing LAND owners include Binance, CoinCheck, Metakovan, Pranksy, Socios, and CoinMarketCap among others.

The Sandbox has secured over 60 partnerships, including The Smurfs, Care Bears, Atari, CryptoKitties, and Shaun the Sheep, to build a fun, creative “play-to-earn” platform that offers virtual worlds and game experiences owned and created by players. The play-to-earn model gives players true ownership of anything they collect in the game, allowing them to trade it to other players (including outside the game on other websites), transfer it to other players, or even resell it.

The Sandbox is scheduled to launch its full Alpha for players in Q2 2021, enabling anyone to experience a social hub and gain the power to build a fantastic collection of fantasy and role-playing adventures that can be traded as NFTs with other players, creators, and artists on the platform.

About The Sandbox
The Sandbox, a subsidiary of Animoca Brands, is one of the decentralized virtual worlds that has been fueling the recent growth of virtual real-estate demand. The Sandbox has partnered with major IPs and brands including Atari, Rollercoaster Tycoon, Care Bears, The Smurfs, Shaun the Sheep, and Binance, and expands their use in support of good causes. Building on existing The Sandbox IP that has more than 40 million global installs on mobile, The Sandbox NFT Metaverse will offer players and creators a decentralized and intuitive platform to create immersive 3D worlds and game experiences and to safely store, trade, and monetize creations through blockchain.

About 21x
Bill Lee (@westcoastbill) is the founder of 21x (www.21x.com) and is an investor and developer of virtual lands in the leading blockchain properties across the metaverses. He is also the co-founder of Craft Ventures (https://www.craftventures.com/team/bill-lee), an early stage venture fund with over $850M in management, and has been an angel investor in companies such as Tesla, Coinbase, Cloud9, and Opensea.  In his spare time, he also collects NFT’s and maintains a VR museum at http://art.21x.com. You can follow his escapades on Twitter (@westcoastbill).

About Chris Ye
Chris is the Co-Founder and CEO of Uken Games (www.uken.com), the studio behind notable titles Who Wants To Be A Millionaire, Jeopardy! World Tour, and Ava’s Manor. Collectively, Uken has amassed over 60 million downloads worldwide making it one of the top independent game studios in Canada. In 2018, Chris organized the sale of Bingo Pop, Uken’s first major hit, to Jam City, in a $90M sale. He’s also been an angel investor in companies such as Dapper Labs, Horizon Blockchain Games, Bunch, and LogDNA. You can find him on Twitter @cye.

About Sundeep Madra – Sunny is an experienced entrepreneur, investor and technologist. He co-founded Autonomic and served as CEO until it was acquired by Ford Smart Mobility in February 2018, and also co-founded Xtreme Labs (acquired by Pivotal in 2013). He is currently Vice President, Ford X at Ford Motor Company.

About Gemini – Gemini is a leading crypto platform to buy, sell, store, and earn crypto.

About NiftyGateway – Nifty Gateway is a leading NFT platform to buy, sell and store digital art and collectibles.

About Avenged Sevenfold – AVENGED SEVENFOLD became one of the world’s biggest rock bands by creating a sound that broke through obstacles of language, distance and culture. They raised the stakes and standards for the genre with a string of blockbuster, platinum-selling albums, including 2003’s Waking the Fallen, the 2005 breakthrough, City Of Evil, 2007’s Avenged Sevenfold, 2008’s DVD/CD Diamonds in the Rough and two consecutive No. 1’s on Billboard’s Top 200 Albums chart: 2010’s platinum-selling Nightmare and 2013’s platinum-selling Hail To The King. They’ve achieved Diamond, Platinum and Gold awards for both album and single sales in a dozen countries, racked up over a billion video views and a billion-plus Spotify streams, have consistently been one of the most-played bands on rock radio for over a decade with multiple No. 1 singles, have consistently sold out arenas and headlined the most prestigious rock festivals around the globe including Download (UK), Rock on the Range (US), Soundwave (Australia), Summer Sonic (Japan) and Graspop (Belgium), Hellfest (France), amassing a diehard international fan base whose members number in the millions.