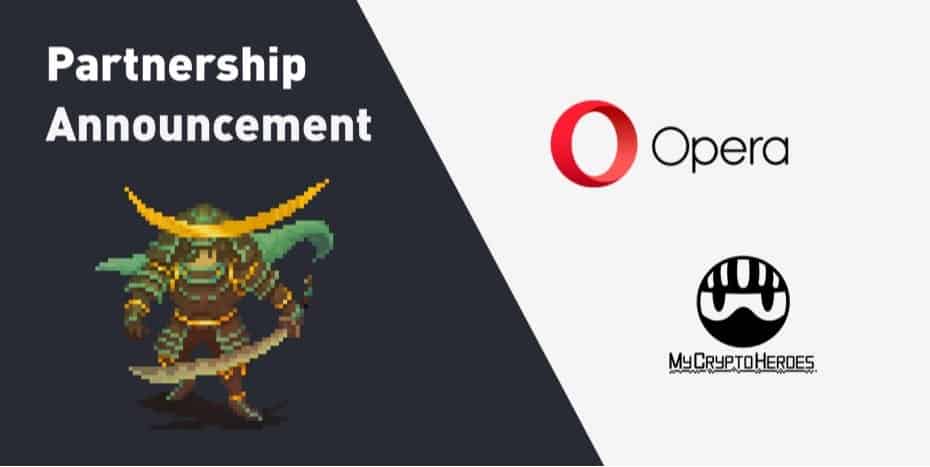 With a tweet that came out a few minutes ago, the popular Japanese Ethereum game MyCryptoHeroes (MCH) announced a new collaboration with the Opera Browser.

Opera is well-known in the crypto industry as the first Web 3 browser with native support for cryptocurrencies, non-fungible tokens (in-game assets) and decentralized applications.

Opera has a huge worldwide user base and with this partnership, MyCryptoHeroes is looking to expand its player base across all continents. MCH is now listed under the dapps category in opera and we might see integrations in the upcoming MCH+ Games.

Opera sees Web 3 as an umbrella term for a set of emerging technologies that use cryptocurrencies and blockchains. They are among the first believers in the browsers space along with Brave who natively support the usage of dapps. Make sure you watch the video below.

In 2018, Opera saw more than 120 Million Active Monthly Users, making it one of the most used browsers.

MyCryptoHeroes is a fast-evolving blockchain game with more than 70,000 players,.

The successful role-playing blockchain game with its Japanese pixel-art graphics and deep gameplay has seen tremendous growth, some of the early players saw an x20+ return of investment and in some cases, much more. Undoubtfully, the game has managed to create an overwhelming community, especially in Asia and specifically, in Japan, where Double Jump Tokyo makes moves in the National television with a tv-spot.

MCH has also partnered with a number of projects including HTC, the smartphone manufacturer where MCH can be found inside the Exodus smartphones.

Care to learn more? Read our interview with Kokushi, BizDev of MCH or explore the articles below.