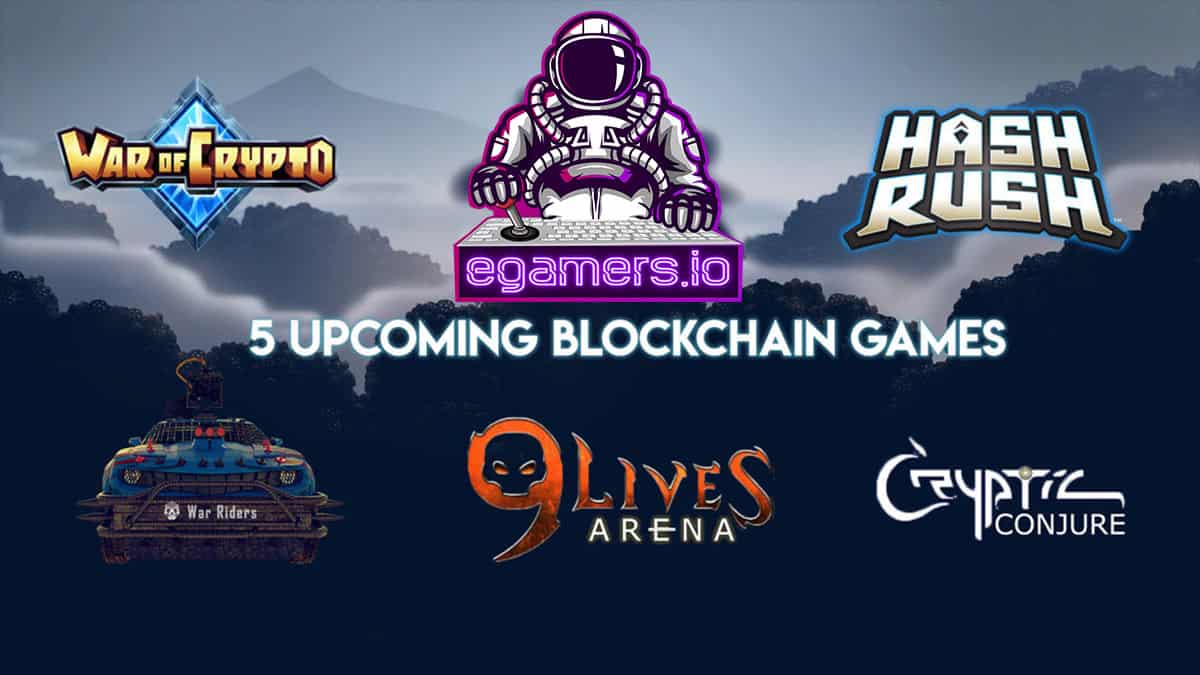 The evolution of Video Games over the years has surpassed every imagination. From the simplest game, Pong to the world-famous Fornite, Gamers have always had time to play and keep playing, all day and night.

After Bitcoin, people realized that decentralized economies could be a part of any video game. Think about it a little, My Dual Swords Katana-Katana in Lineage 2 cost me money to buy, but, it stays locked in the game. There is no way to get them outside of the game or sell them to another player for real money.

Blockchain technology is inspiring a new movement of games and gamers. Eventually, as the years go by, most games will adopt a cryptocurrency to reward the players for their time and performance.

Today I’m happy to present you five upcoming blockchain games set to disturb the gaming industry, each one in its way. Without further due, let’s get to our first game.

Feel Lazy to Read? Watch the Video for the Five Upcoming Blockchain Games.

This one is special. It’s the first game that utilizes ERC1155 Token technology.

War of Crypto is under development by Lucille Games, and it will first be available as a web game, and later, the mobile app will come out.

The game has incredible battle mechanics, and ENJ will power full-blown 3D Graphics and the in-game economy.

In case you would like to get a hero before anyone else and enjoy the early adoption benefits, Private pre-sale will begin on July 28 and public pre-sale on July 30. Make sure you register for a seat and get your loot-box before they run out.

Watch the War of Crypto Trailer

In our upcoming blockchain games list, Hash Rush could not be absent. It is an RTS (Real-Time Strategy) game that hasn’t been covered yet by us but deserves to be on our list.

Build your colony on a small planet in the expansive Hermeian Universe. Mine valuable Crypto Crystals, defend your buildings and trade with other players to make your colony into the galaxy’s envy.

The game will be publicly available in Q3 of 2018 for PC.

On July 31, Hash Rush will be available as a public alpha version to 2000 gamers who sign-up for early access. If you want to try the game, submit this form. The alpha stage will run until September 28. There is no guarantee that you will be selected, but it worths trying.

There are a few solid reasons that made me include War Riders in this article today.

War Riders is an MMO (Massive Multiplayer Online) where you can hijack other players while driving your battle car. The game offers the ability to hide in local bases, surrender in a fight (how dare you?) while you try building an army of thieves.

BZN is the native token of War Riders, it is mineable by crossing particular checkpoints in the map, and it will work alongside with ethereum for the game’s economy. There will also be a deflationary mechanism where marketplace transactions with BZN will burn 30% of each transaction.

There is currently no exact release date but expect a beta for premium grade vehicle owners this Fall, and the full release will probably be in Winter 2019.

9Lives Arena is an RPG Blockchain Game, focusing on 1vs1 Fantasy PVP. You have full control over your champion, and there are options like bloodline, passive skill, artwork, and many more to choose from.

The game seems to share similarities with Souls Series or if you prefer, Tekken, which was my favorite at that time.

9Lives Arena features the first cross-platform companion, Ooogy! This not-so-adorable pet will mine valuable resources, craft for you, and lumberjack while you are offline.

The game is under development for PC, Playstation 4, Xbox, Android & iOS. There is no estimation on when the game will be released, but we are waiting for news. The platform used to develop the game in Unreal Engine 4.

Before we move to our last game for this article, it’s worth to mention that 9Lives Arena is using Enjin’s ERC1155 Token to power the game’s economy. It is the second one after the War of Crypto, which utilizes this technology.

Across the land of Kyra Three may keep a secret if two of them are dead, and that’s what Cryptic Conjure is all about, die like the rest of craft spells and be one of the best.

Some special features make it unique. You can craft skill and sell it to others, but each time your skill is sold, it loses a percentage of its power until it fades away. This mechanism brings trust issues between the players. Who would you trust to share your skills with?

Like in politics, the game features a council of nine people. The players occupy eight of them, and the last one is for the development team. 4 out of 8 are permanently and only for pre-sale contributors who purchase the “seat.” The other 4 are regular players who get elected every six weeks.

Recently we hosted an interview with Jason Wishnov, CEO of Cryptic Conjure. Make sure you check it out. Also, you can read our Cryptic Conjure Review.

These are 5 of the best upcoming blockchain games. In the future, we will cover more games as we couldn’t fit all of them here. Please note that we don’t present games in any particular order. Stay tuned for part 2 next week.