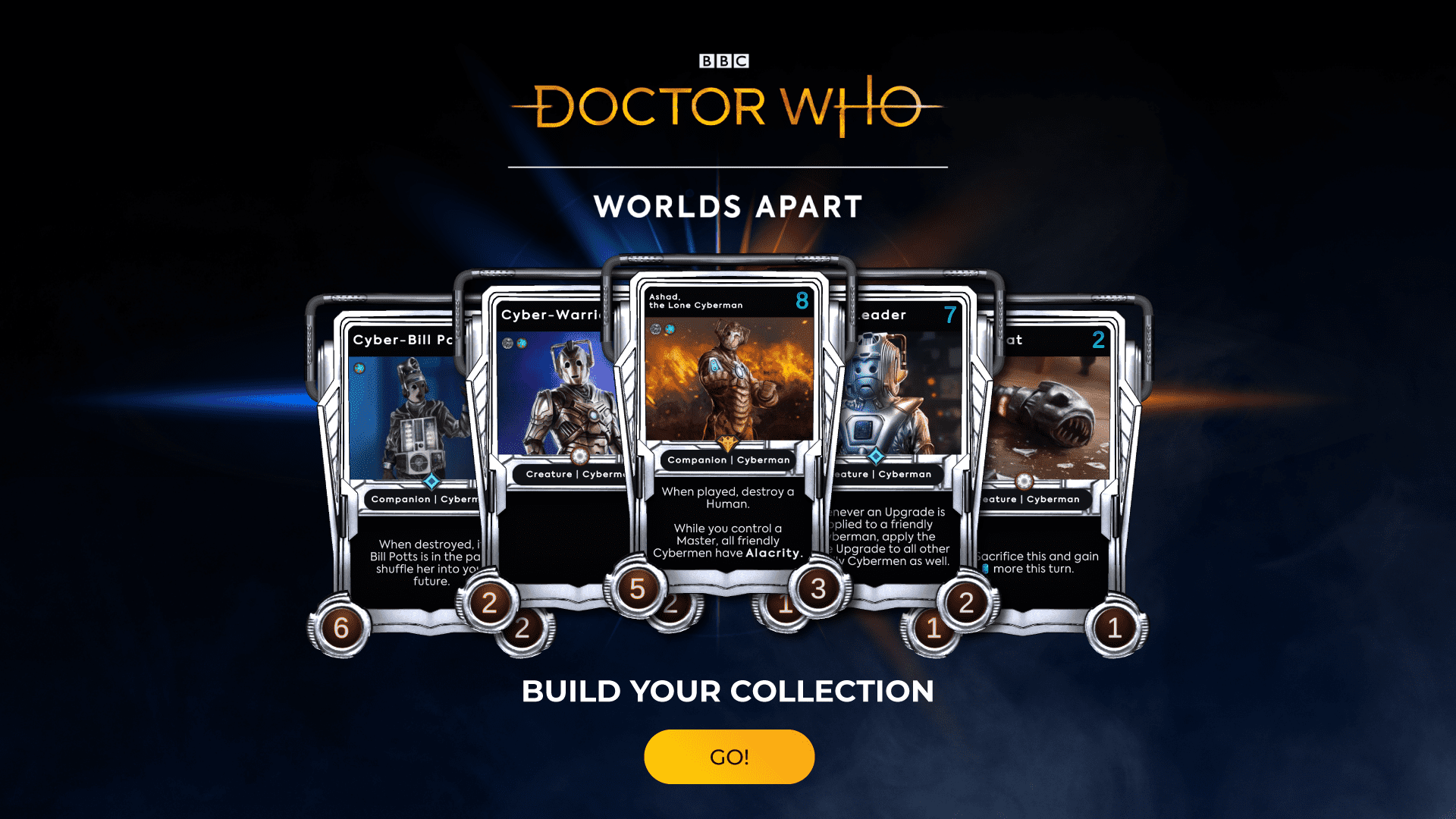 The set will include two brand new packs of the cards themed around the transmedia series of the same name, which follows Doctors from across the series as they face Daleks and the ancient alien race known as the Kotturuh.

Doctor Who: Worlds Apart is an officially licensed digital trading card game published by Reality Gaming Group that has been in development since early 2021, combining the richness and variety of Doctor Who lore with a deep, strategic game mechanic for PC and Mac.

The ‘Time Lord Victorious’ set marks the first time that completely new cards have been added permanently to the game, alongside the original cards released as part of the “Unearthly Origins” set in November 2020.

Each of the fifty new cards features hand-drawn artwork, characters, companions and enemies from the Doctor Who universe, classic and new.

All Doctor Who: Worlds Apart cards available to purchase use Non-Fungible Token (NFT) technology, which enables players to sell and trade the cards with each other on an open marketplace. Every card in the game is available in beautiful 3D frames, which allow players to create custom decks that are truly unique, making every card a collector’s item.

The cards in the ‘Time Lord Victorious’ set are available in either in the ‘Core Pack’, priced at $4.99, or the ‘Premium Pack’, priced at $49.99. All the cards, artworks, characters and stats are the same between the packs, so you only need the Core Pack to enjoy the new mechanics and gameplay. The Premium Pack, designed with collectors and NFT enthusiasts in mind, features the brand new  ‘Time Lord Victorious’ and ‘Kotturuh’ frames and will only be available for a limited time.

All Doctor Who: Worlds Apart cards get minted onto the blockchain when players open packs, and are assigned a unique serial number so every card is truly a one of a kind. Serial #1 cards of popular characters can reach high values amongst digital collectors on the marketplace and can even be exported to public marketplaces like Opensea, representing true digital ownership.

“This latest set of cards will provide players with new ways to experience the game when the alpha launches later this year,” said Reality Gaming Group’s Co-Founder Tony Pearce, “Because every Time Lord Victorious card is an NFT that you own, you can trade and sell your cards directly with other players and Doctor Who fans, building your unique collection of cards and frames just like you would in a physical trading card game.”

More information on Doctor Who: Worlds Apart can be found here: https://doctorwho-worldsapart.com/

All Reality Gaming Group eNFTs, including minted Doctor Who: Worlds Apart cards, run on our own self-created “sidechain” of the Ethereum mainnet. This allows us to make substantial reductions to the amount of energy used per transaction. We have recently integrated with layer 2 network Polygon to further reduce these energy costs. Reality Gaming Group is committed to developing our “Game For Earth” energy plan and will continue to seek to minimise energy expenditure on all NFT projects. All non-blockchain data generated by Reality Gaming Group is stored and processed on servers that use 100% renewable energy.

Doctor Who is one of the longest running action-adventure television series in the world spanning 57 years and winning over 100 awards. This quintessentially British show has a huge global following, with 9.6m fans across social platforms/channels and 100m video views on YouTube in the last year alone. It has been honoured by Guinness World Records as the longest running science-fiction series in the world. Doctor Who has a proven track-record in consumer products and live entertainment with over four and a half million Sonic Screwdrivers sold in the past eleven years, over 13 million action figures sold since 2005, over 19 million DVDs sold globally and over one million tickets sold for live events.

BBC Studios, a global content company with British creativity at its heart, is a commercial subsidiary of the BBC Group.  Able to take an idea seamlessly from thought to screen, it spans content financing, development, production, sales, branded services, and ancillaries from both its own productions and programmes and formats made by high-quality UK independents. Award-winning British programmes made by the business are internationally recognised across a broad range of genres and specialisms, including factual, drama, entertainment and comedy. BBC Studios has offices in 22 markets globally, including six production bases in the UK and production bases and partnerships in a further nine countries around the world. The company, which makes around 2,500 hours of content a year, is a champion for British creativity around the world and a committed partner for the UK’s independent sector. Created in April 2018 by the merger of two existing commercial subsidiaries, BBC Worldwide and BBC Studios, the company has revenue of around £1.4bn.  In the year to March 2019, it returned £243m to the BBC Group, complementing the BBC’s licence fee and enhancing programmes for UK audiences.